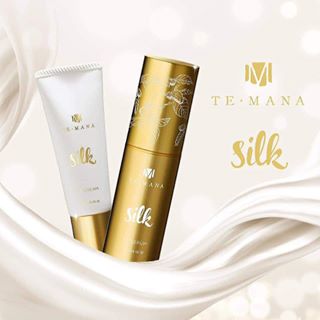 One of the most anticipated product developments announced at Global Business Summit in New York City was a product line that we’ve actually been teasing for over a year now. In limited releases, it has already become one of the most popular products in company history. We’re talking, of course, about TeMana Silk!

TeMana Silk is an all-new anti-aging product line from TeMana with two products: AA Serum and CC cream. TeMana Silk has incorporated a whole new way to deliver pure Tahitian Noni to the skin, and it is already a huge sensation where it has been introduced!

One Japanese IPC, who had a chance to preview this product in a limited release, reported that after a week of using these products she was told that her skin had become brighter and her wrinkles appeared to have decreased.

Another Japanese IPC let us know that she could tell the appearance of the wrinkles around her eyes had already improved after using AA serum for just ONE day! She commented that she is “looking forward to seeing how her life changes after seeing such incredible results!”

The thing that makes TeMana Silk products so special is, predictably, pure, authentic noni from Tahiti. Noni has a powerful anti-aging effect. We took full advantage of those benefits to create TeMana Silk AA Serum and CC Cream.

When creating TeMana Silk, our research teams developed a new delivery system called “Noni Liposome.” Noni Liposome is a small capsule that allows noni seed extract to penetrate deep into your skin and ultimately helps improve the appearance of wrinkles and pores.

We knew TeMana Silk needed to live up to the high standard set by TeMana Brightening. They also needed to embody the image of “Tahitian beauty” and “Silk.” That is when we started developing the liposomal Noni seed extract and other important breakthroughs.